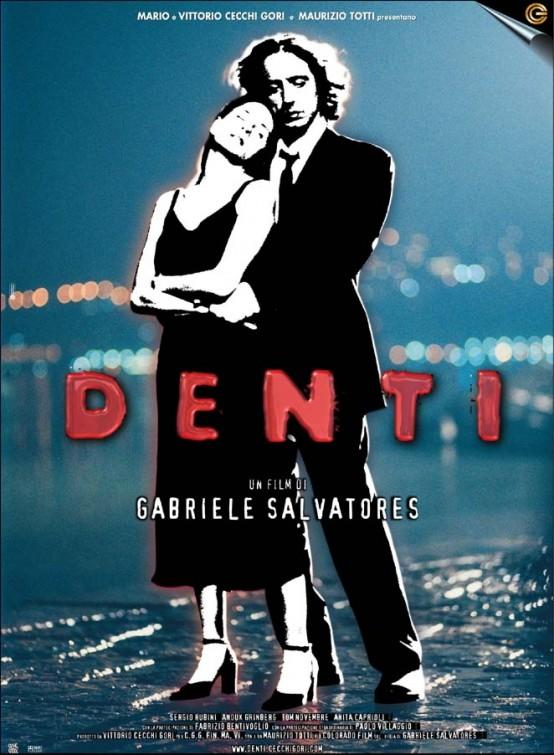 Antonio has always had a problem. His two front teeth are enormous, attract attention and are impossible to hide. He has recently separated from his first wife and is now living with his new love, Maria. But Antonio thinks she’s having an affair with her dentist. During an argument Maria throws an ashtray at him, breaking his front teeth. Antonio searches for a dentist to fix them, but what he also discovers is that his gums hide something strange. As he runs his tongue over the empty sockets, memories, ghosts, slivers of the past suddenly flash into his consciousness. With the painkillers he takes and his increasingly paranoid state of mind, Antonio descends into an inner torment where past, present, reality and obsessions merge together. To further complicate matters, his young daughter by his first marriage is also deve-loping rather prominent teeth. Denti, by Italian director Gabriele Salvatore (Mediterraneo, Nirvana) is a surreal, wickedly funny black comedy. Teeth symbolize pain and a trip to the dentist is something we hope to avoid except when absolutely necessary. Salvatores confronts our fears head on, delivering a subtle, comic study of a man whose teeth are more than just… teeth. The movie features a stunning music track, from Gregorian chants to techno rock, underlining the otherworldliness of Antonio’s odd journey, marvellously played by Sergio Rubini (The Talented Mr. Ripley, Tv’s The Count of Monte Christo). At times a surreal blend of Freud and horror-film conventions, at others an Oedipal drama set against a tortured love affair, Denti is truly one of the most unusual and visually arresting Italian films in recent years.