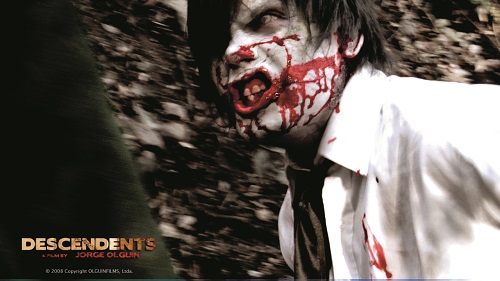 A ten year old girl awakes in the middle of a devastated landscape. She begins to wander through a contaminated land, in search of food and people. But all she finds is chaos and destruction. Soldiers in gas masks are waging a ferocious war against the infected. There’s a virus in the air that turns people into raging zombies. She, however, seems to be immune to the disease, just like the other children she meets. They also have another thing in common; a recurring dream of going into the sea. The small band of children try to find their way to the coast, pursued by the military who seem to be as determined on their destruction as on the zombies. Young Chilean horror talent Jorge Olguin visited the Bifff in 2003 to present his vampire thriller Eternal Blood. You can only wonder why it took to so long to hear from him again, because his follow-up is a very strong and original piece of postapocalyptic sci-fi horror. Shot in just 9 days, with a bunch of children ranging from 5 to 10 years old in the lead, Descendents is a truly dark and disturbing ride set in a dystopian world that looks like a crossing between 28 Days Later and Children of Men, with strong echoes to Chile‘s past as a military dictatorship. Already busy preparing his next feature, the fantastic epic the Call of The Sea, Jorge Olguin remains a talent to keep an eye on.