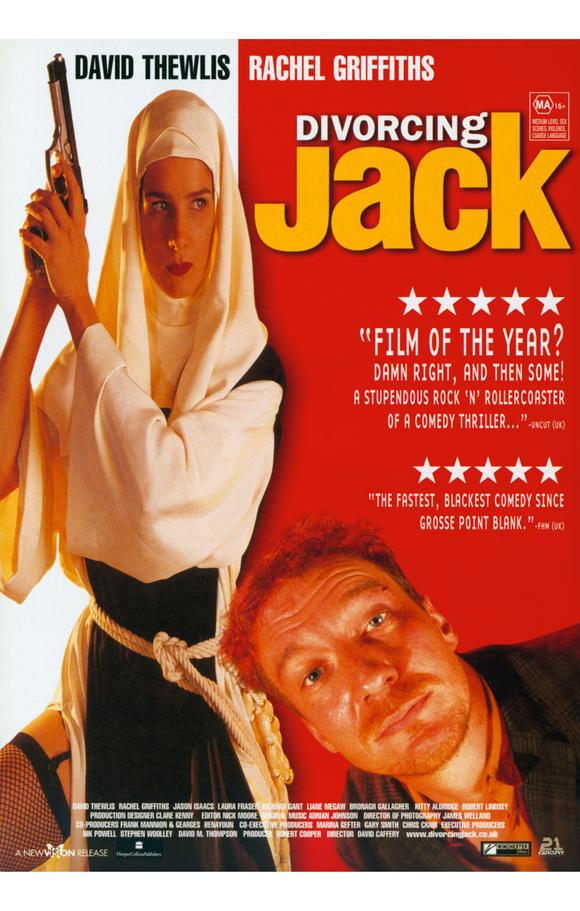 Thousand nine hundred ninety-nine. In Northern Ireland, now an independent state, elections are under way for the first Prime Minister. Catholic Michael Brinn is the frontrunner. Dan Starkey, a seedy and boozy newspaper columnist, meets an attractive young woman, Margaret, and invites her to his party. He’s caught kissing her by his wife Patricia, who throws him out. He spends the night with Margaret, who later gives him a cassette from a set given to her by her father. When he returns from buying pizza, he finds Margaret shot. Her dying words sound like “Divorce… Jack”. Starkey learns that Margaret’s father was Brinn’s right-hand man David McGarry. And that this information is dangerous, is proven when Starkey and visiting US reporter Charles Parker narrowly escape getting shot by a Protestant militia. Needing change to phone Patricia, he sells the cassette in a street market. But before he can get through to his wife, she gets kidnapped by masked man. Now wanted for Margaret’s killing and deeply in trouble, Starkey goes underground with Parker’s help. When he gets attacked again, Starkey gets away with the help of Lee, a nurse moonlighting as a “Nun-O-Gram”. By a chance remark of his attractive saviour, he discovers that Margaret’s cassette is at the same time the cause for and the possible solution to his precarious situation. A frantic search for the missing tape ensues.
Director David Caffrey and screenwriter-novelist Colin Bateman have managed to pull it off. They’ve made a sharp, witty and inventive comedy thriller about Northern Ireland. Caffrey, director of several admired shorts, and Bateman, who adapted his own novel for the big screen, have dug deep in the troubled soil of Northern Ireland. They came up with poignant dark humour, which they put in a pacey, narrow-eyed and tight plotted narrative. There are no favourites here. Both sides are being portrayed as self-serving, treacherous psychopaths. The cast, right down to the smallest bit part, relished getting their teeth into some juicy character creation. David Thewlis (Life is Sweet, Naked, Dragonheart) gives a vivid impression of a man disintegrating from the inside out as the cynical hack Dan Starkey. Rachel Griffiths (Muriel’s Wedding, Jude, My Son the Fanatic) steals the show as the feisty, tooled-up stripper nun Lee. US journalist Charles Parker (City Hall, The Big Lebowski, Godzilla) is a part by Charles Gant and Robert Lindsay (Genghis Cohn, Brazen Hussies, Fierce Creatures) is Michael Brinn. Just one parting thought. If the Coen brothers were Brittish, this would be the kind of movie they’d make.