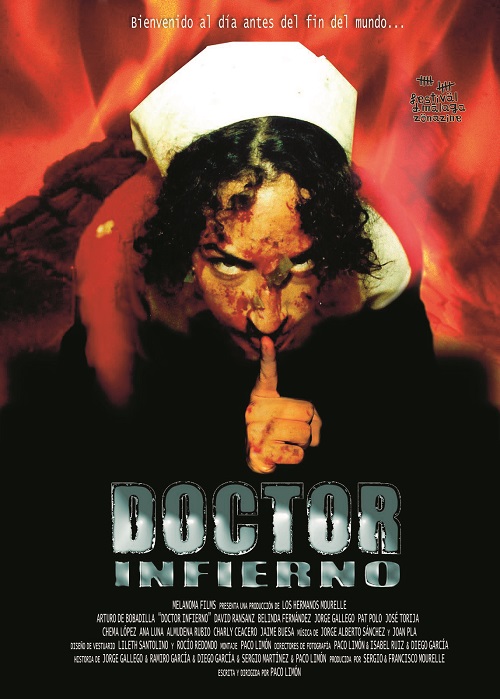 Doctor Hell, famous gynaecologist, wants to control the entire world. His plan : to heal humanity using a miraculous medicine in return for its complete submission. Deep down in his secret bunker, beds are filled with writhing test-subjects who have miraculously survived his perfidious experiments. Now there’s one thing to do. Get rid of one cumbersome witness ; nurse Garcia. But the killer sent to assassinate her, fails miserably. And the nurse, built like a truck-driver, is out for revenge. The nurse, the killer, one neighbour’s boyfriend, a building manager and a handful of other nasty people will all get involved in a mad killing frenzy in Doctor Hell’s secret bunker. It has been predicted. Intense exposure to the combined works of Dario Argento, Lucio Fulci, Brian De Palma, Quentin Tarantino and the likes, might wreak havoc on the next generation of movie freaks. Doctor Hell is a flagrant example of all these influences : wacky, irreverent and over-the-top-humour to accompany a completely deranged story, which serves as a pretext for tons of cartoon-like gory violence. Writer, director, producer, editor, composer and special effects wizard Paco Limon is very generous with references to the old and new masters in Doctor Hell, a movie which has no other purpose but to literally entertain the hell out of you.