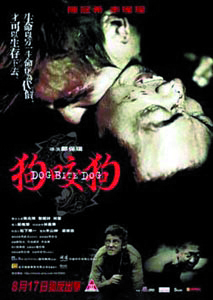 Pang, a ruthless assassin, is plucked from the underworld of Cambodia and unleashed on the streets of Hong Kong. Trained from childhood to be an inhuman, silent and faceless killer, he uses any method available to complete his mission. After leaving a bloody carnage in a restaurant, two cops, Lin and Wai, arrive at the crime scene. They notice a suspicious cab. When following the car, they are led to Pang. But when they try to convince him to give himself up and release the civilian he has taken hostage, Pang shoots both the hostage and Lin. He runs away and finds shelter at a garbage dump, where he meets Yue, who’s molested by her father. Pang kills the man and finds some peace together with Yue. But in Wai, he has found his match. The equally ruthless police officer closes in for a merciless confrontation. Brutal, uncompromising and with the ferocity of a punch to the throat, Dog Bite Dog is a visceral and dazzling odyssey reminiscent of Chan-wook Park’s Vengeange trilogy and the best of Ringo Lam and John Woo. This is certainly one of the most violent, thrilling and exhilarating thrillers you’ll see this year at the Bifff. Main actors Edison Chen ( Infernal Affairs, Initial D, The Grudge 2 ) and Sam Lee (Made in Hong Kong, Ping Pong, Gen-X Cops ) are like two rabid dogs, battling it out with each other from the streets of Hong Kong to the dusty Cambodian outback.