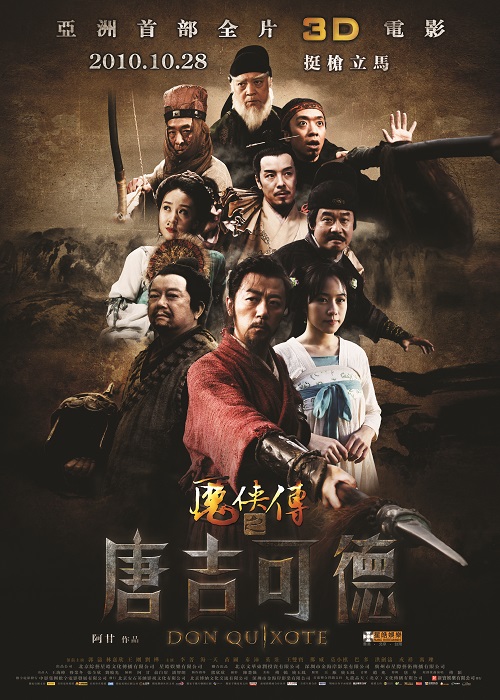 Ancient China. Tang Fanghai is the bane of his parent’s existence. He spends his life dreaming of brave knights and their heroic deeds, instead of getting involved in the family business or finding a wife. One day he decides to leave the house and become a wandering knight in search of injustice. After Tang pays an old beggar on a mountain top to give him a beating that will “unlock” his magical powers, he takes up arms against a gang of bandits that are kidnapping the beautiful farmers daughter Cuihua. Tang even succeeds, albeit with more luck than prowess, to drive them off. This gets him his Sancho Panzo, pig farmer Sang Qui, and a quest : liberating Ciuhua, whom he imagines to be a noble princess. Luck and coincidence remain on Tang’s side and by the time he reaches the city where Ciuhua is being held in the harem of a mob boss, his reputation has swollen to legendary proportions. But how long will this last ? In this fantastic comedy, Cervantes’ legendary creation gets a makeover Asian style. And that’s not so strange as it seems. The medieval knight’s code is quite alike to the warrior ethic of the wu xia films. Lead actor Guo Tao manages to combine the two cultures through his entertaining interpretation, an endearing mix of chivalrous innocence and outright stupidity. Director Ah Gan adds some gravity defying battles in 3D and comic relief to the cocktail. In short, spectacular eye-candy for the entire family.