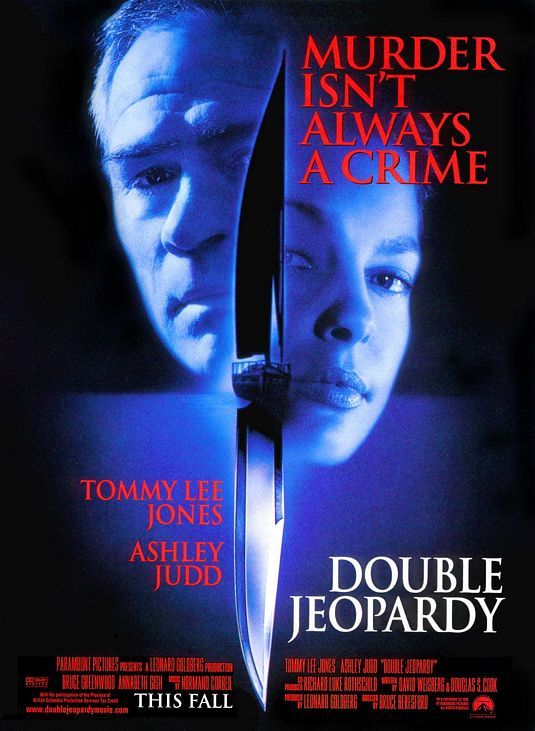 Framed for the murder of her husband, Libby Parsons survives the long years in prison with two burning desires sustaining her: finding her son and solving the mystery that destroyed her oncehappy life. Standing between her and her quest, however, is her parole officer, Travis Lehman. When Libby discovers that her husband faked his death and let her take the blame while he got away with the insurance money, Libby decides to find him and kill him. She now poses a dangerous challenge to the cynical officer, one that pits him against his superiors and his law enforcement colleagues. According to the Fifth Amendment to the constitution of the United States, no person shall be tried twice for the same offence. Does this mean that our heroine will kill her husband and get away with it ? You’ll find out in Double Jeopardy, the latest film from distinguished director and writer Bruce Beresford (Breaker Morant, Tender Mercies, Driving Miss Daisy). Ashley Judd (Ruby in Paradise, Heat, A Time to Kill) stars as Libby Parsons, a woman walking a thin line between justice and vengeance. Tommy Lee Jones (The Fugitive, Natural Born Killers, Men in Black) is at his stoic best as parole officer Lehman. Bruce Greenwood (Passenger 57, Exotica, The Sweet Hereafter) plays Libby’s husband Nick and Annabeth Gish (Wyatt Earp, Nixon) appears as Angie, Libby’s best friend who knows more than she cares to admit.