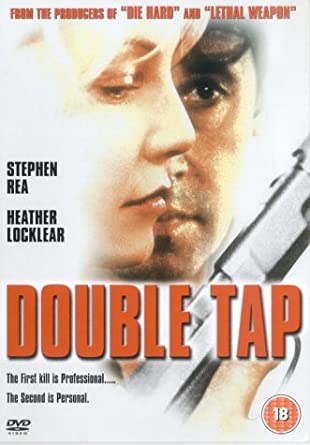 The FBI prepares to burst into a gang infested house, but inside a lone gunman masterfully navigates through the gang members, killing them all on his way to the leader, Booya James. Just as he shoots James, FBI agent Kathleen Boyle, rushes in. She notices James is dead and races after his killer. The gunman easily surprises her. Boyle gives a sigh of relief when he leaves her alive, escaping quickly into the thick smoke of gas, now permeating the house. Back at the FBI, Boyle, a no nonsense, by the book agent, is taken off her current case of Mafia boss Conigliaro, and ordered to investigate the unknown gunman. The speculation is that he’s an infamous assassin known as the “Shadow”; he’s the best, with a perfect record and is known for never killing a cop or fed, just the bad guys. The good guys have basically left him alone because he doesn’t hurt them, but his hit on James ruined months of work.
Double Tap is the first picture to be produced through Joel Silver (Commando, Lethal Weapon, Die Hard) and Richard Donner’s (The Toy, Ladyhawke, The Wild, Wild West) newly formed Decade. Greg Yaitanes (Hard Justice, Rorschach, America’s Most Wanted) directed this film about a female FBI agent and a hitmen, who must team up to survive. Heather Locklear (The First Wives Club, TV serial Melrose Place) stars as FBI agent Kathleen Boyle. Stephen Rea (The Crying Game, Princess Caraboo) stars as the hitman.