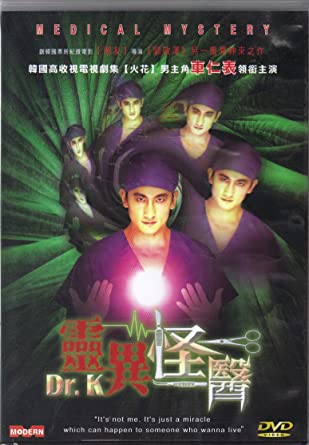 Doctor K, Kang Ji-min, in the fourth year of his residency for neuropsychosis, has a schedule that is quite crammed allowing for no more than two hours’ sleep a day. He has an unusual energy which makes it possible to operate on a patient for more than 10 hours. Pyo Ji-Soo, a classmate of Doctor K and a niece of Mr Lee Seok-Myung who is the chief of the neuropsychosis department, is one of the few female aesthetic doctors. She is envious of Doctor K, as he is the best student at the medical school. Gradually, her curiosity towards Doctor K grows. Surprisingly Doctor K succeeded in urgent operations on three children, all of whom it seemed impossible to recover. That made Lee Seok-Myung feel dubious about Doctor K’s way of operating. Moreover, there was a widely spread rumor saying that Doctor K went out to an unknown place every night. In the meantime, Oh Sae-Yeon, a 19-year-old girl was hospitalized. She was suffering from a malignant tumor. She had been hurt by her incurable disease not only phisically but also emotionally. She came to open up to Doctor K, and wanting to save her life, he decides to perform a dangerous operation on her.
It could be said that medical technology is the most cutting edge of scientific technology in the modern world. Advanced modern medical science, originating from the western world, has shown its splendid growth to us. There are, however, several diseases incurable even by developed medical technology. Surprisingly, those diseases happen to be cured in Asia from time to time. In Doctor K the power of shamanism is combined with the top medical technology of the modern world.