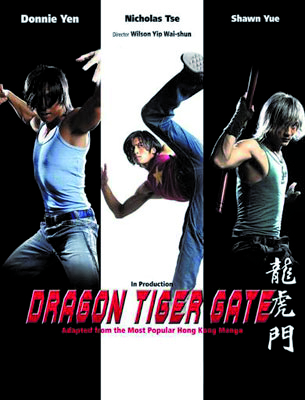 Tiger Wong is a highly skilled fighter with a strong sense of justice. When stopping a bully from beating up his victim, he comes into possession of a gold medal, the Lousha Death Plaque. The jewel belongs to the Lousha Gate, a major criminal organisation with tentacles all over Asia. Whoever owns the medal, has the power to demand their full cooperation. Tiger, unaware of the medal’s powers, is ambushed by the gang during a celebration. He is saved by Dragon Wong, the bodyguard of one of the gangsters sent to retrieve the plaque. Tiger is shocked when he notices a jade pendant worn by Dragon and realizes he’s his step-brother. Both were once pupils at the Dragon Tiger Gate, a martial arts school founded by kung fu masters who taught street urchins to battle oppression. Tiger and Dragon have chosen different paths. Now fate has brought them together again in a titanic struggle of good versus evil. Dragon Tiger Gate is an exciting martial arts adventure, boasting tremendous fight sequences, choreographed by actor and co-producer Donnie Yen, colourful production design and appealing performances. Genre fans will warm to the striking and energetic set-pieces, that are orchestrated with considerable flair by director Wilson Yip. Yen’s choreography combines special effects like slow-motion and elaborate wire work, with plenty of old-fashioned physicality. Starring martial arts artists Donnie Yen ( SPL, Hero, Blade 2 ), Shawn Yue ( Infernal Affairs I & II, Initial D ) and Nicholas Tse ( Gen-X Cops, Time and Tide, New Police Story ).