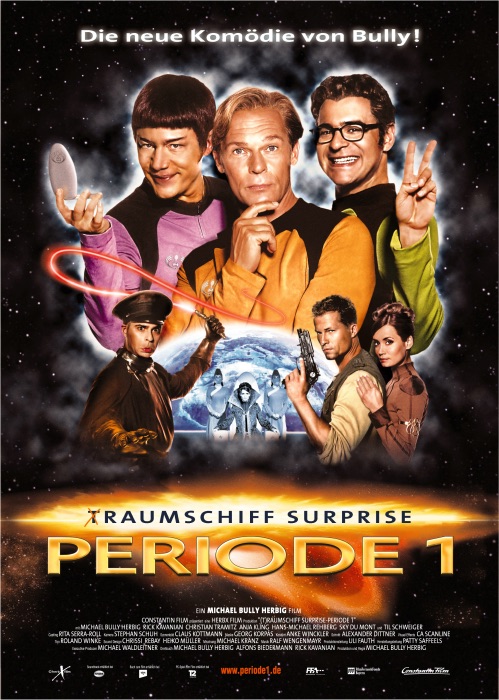 The year 2304. In a UFO that crashlanded in the Nevada desert 300 years ago, mankind found the scientific guidelines which were used to colonize Mars half a century later. Now the descendants of the first colonists are on their way back to Earth. Led by the unbelievably wicked Regulator Rogul and his even more wicked disciple Jens Maul, they are up to no good. In fact, the Martians are planning to subjugate the blue planet to the red one. With a huge array of spaceships, a conquest of Earth seems imminent. And only the crazy crew of Dreamship Surprise can help : Captain Kork, engineer Shrotty and first officer Mr. Spuck. But instead of fighting intergalactic crime, they’re busy with their choreography for the upcoming Miss Waikiki Pageant. With the help of space cowboy and taxi-pilot Rock, they set out to save the Earth. German comedian Michael Herbig is best known for his TV show Bullyparade and for his hilarious western parody The Manitou’s Shoe (2001). With Dreamship Surprise – Period 1, the highly enjoyable and wonderfully campy spoof on the Star Trek series, he has broken all box-office records in Germany. Expect impressive special effects, time travel, ridiculously named technical devices, even more ridiculous techno-babble and Til Schweiger (Tomb Raider, King Arthur) as space cowboy Rock.