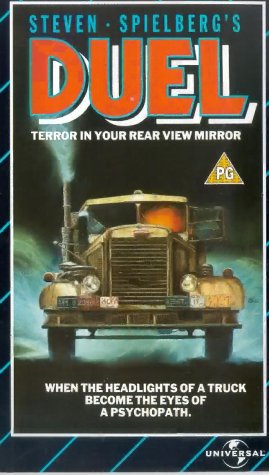 On a Californian road David Mann, sales representative, is quietly driving home. Soon enough, he ends up behind a big truck that is barely moving and blocking the way. After a while, he passes the truck but it quickly catches up to him.
The car driver thinks it is just a game, up until the truck driver tells him to pass him while a car is quickly coming from the opposite direction. He barely avoids it and seriously starts to get scared…
With “Duel”, Steven Spielberg made a sensational debut in the world of moviemaking. Ever since then, we have stopped counting his success as director (“Close Encounters of the Third Kind”, “E.T.”) and producer (“Poltergeist”).
Yet alongside “1941”, “Duel” might be his most successful work. Way less childish and good-natured than the rest of his works, “Duel” is a true nerve-wracking movie where Spielberg does not speculate on the audience’s naivety.
Initially shot for television but screened in movie theaters, “Duel” owes a lot to its screenwriter Richard Matheson.