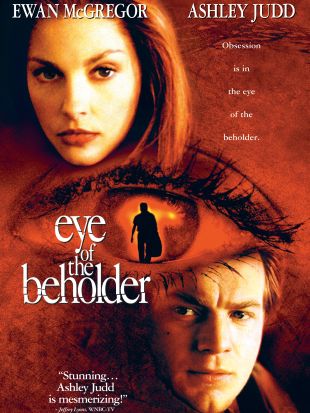 EYE OF THE BEHOLDER

The Eye is a lonely, isolated British intelligence agent who has lost his wife and daughter, for which he blames himself. Yet detachment is part of the job. The Eye’s current mission is to track Joanna Eris, a woman suspected of blackmailing the son of a senior British official. But Eris is more than a blackmailer. She is a seductive, shadowy master of disguises, a frenzied murderer, a lost orphan and an abject mystery whose rage is as fierce as her beauty. The Eye cannot help but be fascinated by Joanna, especially when a surveillance photo of her seems to reveal the ghostly image of his long-lost daughter. As he follows Joanna from murder to murder, he becomes inexorably more and more obsessed with what he sees. But the closer the Eye gets to Joanna’s life, the more dangerous his fantasy becomes. Writer-director Stephan Elliott (Frauds, our Grand Prize 1994 & The Adventures of Priscilla, Queen of the Desert) has created a surrealistic thriller that plunges deep into the eerie, seductive recesses of the human psyche. This unconventional road movie is also a labyrinthine human puzzle with images that will surprise and provoke. Ewan McGregor (Trainspotting, Nightwatch, Star Wars I) stars as the Eye. Beautiful and lethal Joanna is a part by Ashley Judd (Heat, A Time to Kill, Double Jeopardy). With additional performances by Jason Priestley (Tv’s Beverly Hills 90210, Tombstone), Geneviève Bujold (The Moderns, Dead Ringers) and country pop star K.D. Lang.