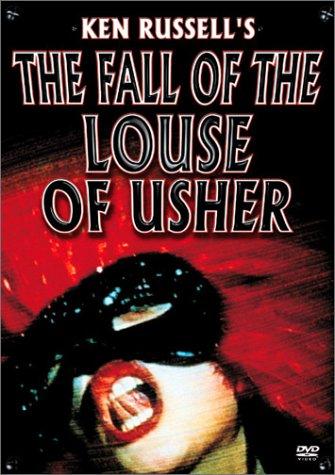 FALL OF THE LOUSE OF USHER

When rock singer Roderick Usher is found guilty for the brutal murder of his wife, he is immediately branded insane and sent to the county lunatic asylum. Once inside the padded cell, he finds himself at the mercy of Dr. Calahari, whose mind-blowing shock treatment gives rise to a series of bizarre and nightmarish adventures. As Roderick undergoes mind blending therapy, Dr. Calahari and the beautiful but strange nurse Smith, gradually unravel the horrible truth behind the Louse of Usher. Flamboyant British director Ken Russell (Tommy, Crimes of Passion, Altered States, Gothic) returns in full force with this outlandish musical comedy horror film, an adaptation of Edgar Allen Poe’s classic tale The Fall of the House of Usher. It took Russell more than 10 years to complete this project. Fed up with the lack of financial backing, he took up a camcorder and shot the film himself. Although Poe’s story remains the nucleus, Russell has interwoven it with half a dozen other of the master’s Tales of Mystery and Imagination. These include The Pit and the Pendulum, The Tell Tale Heart, Buried Alive, The Murders in the Rue Morgue, The Man who was Used Up and The Black Cat. James Johnson of the underground group Gallon Drunk stars as Roderick Usher, while Ken Russell himself plays Dr Calahari.