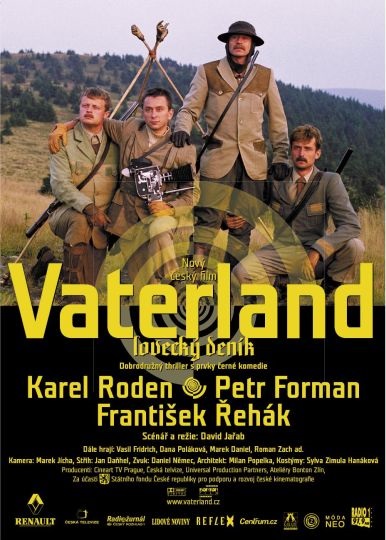 A black limousine and two Jaguar sport cars drive through a Eastern European wasteland of half-ruined, often completely abandoned manors, overgrown roads and empty, dilapidated churches. A couple of locals, listlessly hanging around, watch these passing jewels of western civilization. Six people, firmly settled in the safety of their cars, are hoping to retrieve the family property that was taken from them half a century ago by the communist regime. The old butler Willmer welcomes the group at one of the old manors. It soon becomes clear that the properties are beyond salvation and the only pleasure that remains for them is the ancient hunt for “skeleters”. These elusive and vigilant creatures, of which there are now very few, live in the mountains and only come down once a year to mate. Vaterland is a intriguing blend of black comedy and fantastic thriller by debut director David Jarab. The movie was shot on the Czech-German borderlands, which were originally inhabited by Germans until they were driven out at the end of W.O. II. In the fine tradition of Eastern- European absurdism, Jarab uses fantasy elements and humor for a reflection on power and social structures. Vaterland manages to master an often complex storyline against a background of Communist architectural decay.