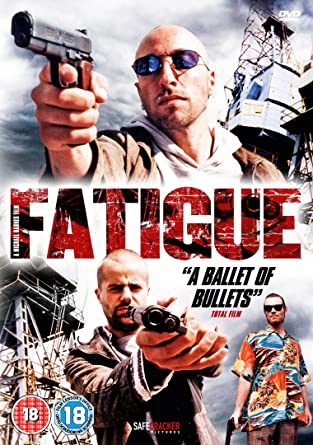 In desperation, small-time loser Mitchell Willow takes on a delivery job for local hard man Eddie Heaver. When his curiosity gets the better of him, he opens one of Heaver’s packages. To his horror, he discovers a severed thumb and realizes it’s time to get out. But there’s one last delivery to be made. Heaver plans to double-cross underworld figurehead Mr. Wernside and set Mitchell up to take the fall. When Mitchell and Heaver meet Wernside’s psychotic right-hand man, Traven, the delivery goes horribly wrong and descends into a fierce shoot-out. Mitchell ends up with a bag of diamonds, a gun and the mob hot on his heels. He’s forced to flee London and take shelter with his ex-girlfriend Rachel, unwittingly involving her in the deadly deal.

Shot over five years with virtually no budget, “borrowed” equipment and with cast and crew working for free, Fatigue is a triumph of perspiration and endurance for its three makers, director Michael Barnes and producers Mark Faiers and Chris Dawson. Inspired by other no-budget success stories as Bad Taste, Evil Dead and El Mariachi, Fatigue is a fast paced, visually inventive surreal action thriller. Despite its limited means, it manages to shock, disturb and entertain the audience, qualities that are often absent in today’s big budget extravaganzas.