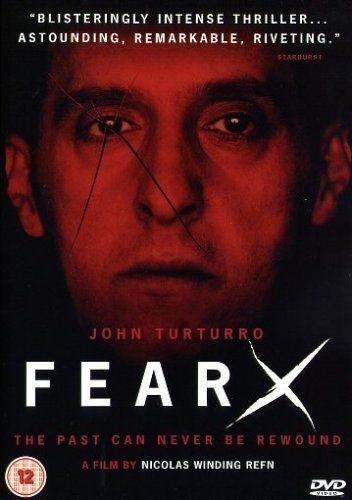 The wife of security guard Harry Cain was gunned down in the parking lot of the shopping mall where he worked. Unable to cope with his feelings of guilt and with the apparent disinterest of the police in solving the case, he decides to take the investigation into his own hands. Harry start studying the black and white surveillance videos from the mall. The killing exists on one of these tapes, but it’s so grainy and diffuse, it’s impossible to make out what’s happening. His pursuit leads him from Wisconsin into Montana and on the trail of a decorated local cop and his wife, who may have crucial information about Harry’s case. But every time Harry thinks he has a handle on things, the solution slithers away from him. He has crossed the line where the quest itself becomes more important than the answer.

Fear X is a supremely elegant, meditative thriller scripted by Hubert Selby Jr. (Requiem for a Dream) and Danish director Nicolas Winding Refn (Bleeder, Pusher) with an intense lead performance by John Turturro (Barton Fink, The Truce) and strong supporting roles by Deborah Unger (The Game, One Point O) and James Remar (What Lies Beneath, 2 Fast 2 Furious). With music by Brian Eno and photography by Larry Smith (Eyes Wide Shot), Fear X is a eerie psycho-drama that plays unnerving mind-games with the audience right down to the end.