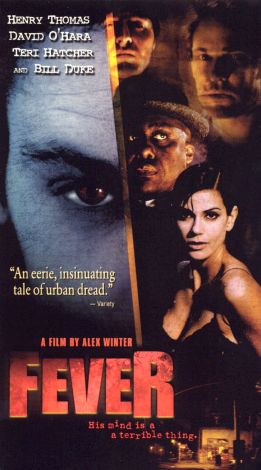 Nick Parker is a reclusive young art teacher who teaches seniors, a job he will soon loose. He finds solace at night painting in his rundown Brooklyn tenement room. One evening, he becomes distracted by noises from the apartment above and meets Will, a mysterious new tenant. Will’s threatening presence and manner unnerve Nick, who retreats back to his room. Soon afterwards the landlord is found brutally murdered. While popular suspicion falls on a drunken former tenant after a heated argument the night before, Nick has his own suspect : the menacing lodger on the floor above. On the verge of mental and physical collapse, intrusions from his concerned middle-class family only aggravate him further. Soon Nick’s irrational behaviour makes a suspect for the police. As his health worsens, Nick spirals into a feverish dream world of murder and madness. With Fever, actor-director Alex Winter (The Lost Boys, Bill and Ted’s Excellent Adventure, Freaked) has delivered a thriller that preys on urban fear and paranoia. He casts aside Hollywood’s false perception of twentysomethings with fancy high-rise lofts for the bitter truth of struggles and crushed aspirations. Winter’s keen direction and captivating style, along with Henry Thomas’ (Valmont, Legends of the Fall) excellent performance as a struggling artist on the verge of a total breakdown, lure the viewer into the mind of a plagued soul, where reality and imagination blur. With additional performances by David O’Hara (Braveheart), Teri Hatcher (Tv’s Lois and Clark, Tomorrow Never Dies) and Bill Duke (Predator, Payback).