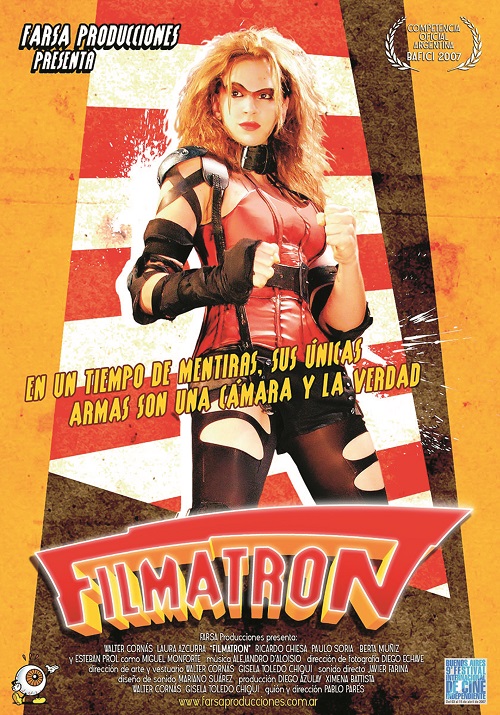 In a not-so-distant future, a country is ruled by a government which ruthlessly censors everything audiovisual. There are no movies at all. Nothing except bizarre TV-shows that are aired to entertain and instruct the people, especially about the artificial food. In this extremely bizarre world, there are daredevil filmmakers who wage a celluloid war with stolen camera’s and lots of creativity. Daniel Vega is shooting one of these films called Rebel Scum, when he’s arrested by the state police. He manages to dispose of the offending videotape by dumping it on geeky comic book fan Lucas, who’s slowly sucked into the deranged world of rebel filmmakers. When the government announces a “Film of the People” contest, Lucas enlists all his friends for a little healthy subversion. Filmatron is a kitsch, dystopian vision from the same bunch of Argentinean film freaks that brought us Zombie Plague : Mutant Zone in 2003. It’s a classic high energy, low budget moviemaking, albeit with higher production values than Zombie Plague. The team of Farsa Produciones has managed to provide us with an enjoyable and cheesy version of George Orwell‘s 1984. Walking a tightrope between risibility and comedy, Filmatron also makes some points about censorship in a country with lingering memories of dictatorship.