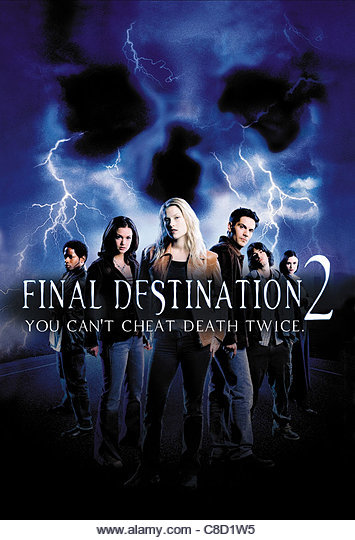 On her way to the beach with her friends, Kimberly Corman has a paralyzing vision of a multi car collision on the freeway up ahead in which they will all perish. She panics and swerves, blocking the on-ramp. Within moments, a huge truck loses its heavy load, setting off a heart-stopping chain reaction that results in the worst pileup in history; exactly as Kimberly envisioned. Her extraordinary psychic gift enabled her to save the lives of six people. But it also produced a new, larger rift in Death’s design. One by one, the survivors succumb to increasingly bizarre and gruesome ends as Kimberly desperately races to block Death’s macabre power.

Final Destination 2 is the thrilling sequel to the worldwide box-office hit of 2000. And this time, the Grim Reaper will not be so easily fooled in this exciting cocktail of horror, stunts, special effects and terror. Directed by stuntman David R. Ellis and written by J. Mackye Gruber and Eric Bress (The Butterfly Effect), Final Destination 2 stars Ali Larter (Final Destination, Legally Blonde), A.J. Cook (The Virgin Suicides), Michael Landes (Hart’s War) and Tony Todd (The Crow, Candyman).