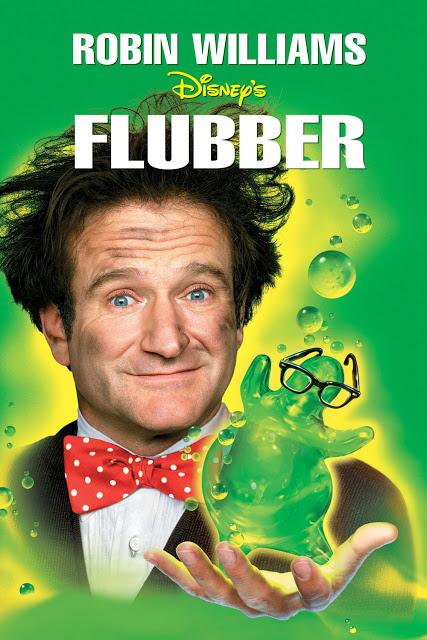 Professor Phillip Brainard is a man so lost in thought that he appears, at times, not to pay attention. He’s even forgotten two dates to marry his sweetheart Sara. But then this guy’s got a lot on his mind. He’s working with his high-voltage, over-amorous flying robot assistant, Weebo, on an idea for a substance that’s not only a revolutionary new source of energy, but may well be the salvation of his financially troubled Medfield College, where his beloved Sara is the president. Late on the afternoon of his third attempt at a wedding, all of Professor Brainard’s hard work in the lab comes together when he creates a miraculous goo that when applied to any object, cars, bowling balls, even people, enables them to fly through the air at remarkable speeds. The stuff defies gravity and looks like rubber. What is it? Flubber!
In 1961, Walt Disney’s The Absent-Minded Professor was the most popular film of the year. The sparkling comedy-fantasy starring Fred MacMurray had the unmistakable Disney magic touch, perfectly blending humor, action and rollicking fun for all ages. Now, Flubber stars the incomparable Robin Williams as the new absent-minded professor. Director John Hughes maintained the spirit of the original film, but refreshed it for today’s audiences.