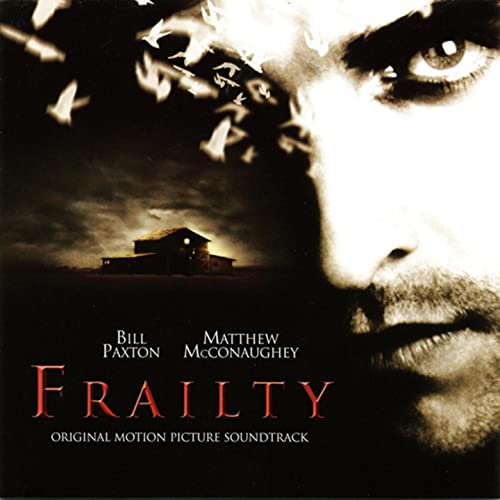 The FBI is searching for a serial killer who calls himself “God’s Hands”. A young man called Fenton Meeks, approaches the lead investigator and claims that he knows the identity of the killer. In a series of flashbacks, Fenton recounts how he and his brother grew up in a very loving family, raised by their widowed father. All that changed the day his father awoke, believing he had been visited by an angel and given a mission to destroy “demons”; seemingly normal-looking people who walk this earth as pure evil. Fenton’s father, and then his brother Adam, swore to carry out this “divine” mission. Fenton refused to participate in the killings and tried to persuade his brother to do the same, but it is obvious to him that they have “snapped”. Until now, he refused to go to the police out of loyalty. The FBI agent follows Fenton to his family’s house, only to be surprised that neither evil nor innocence are what they seem. Frailty is the directing debut of actor Bill Paxton (One False Move, A Simple Plan, U-571), who also plays Father Meeks. Matthew McConaughey (Lone Star, A Time to Kill, Contact) and Powers Boothe (Men of Honour, U-Turn, Nixon) respectively co-star as Fenton Meeks and the FBI agent. Paxton has succeeded in creating a very smart and strong serial killer drama that manages to scare you without lots of gore or splatter. The sound effects are as much a part of the movie as the superb acting by the three leads. The score by Brian Tyler (The 4th Floor, House on Terror Tract) is perfect and the ending of the movie is guaranteed to surprise you.