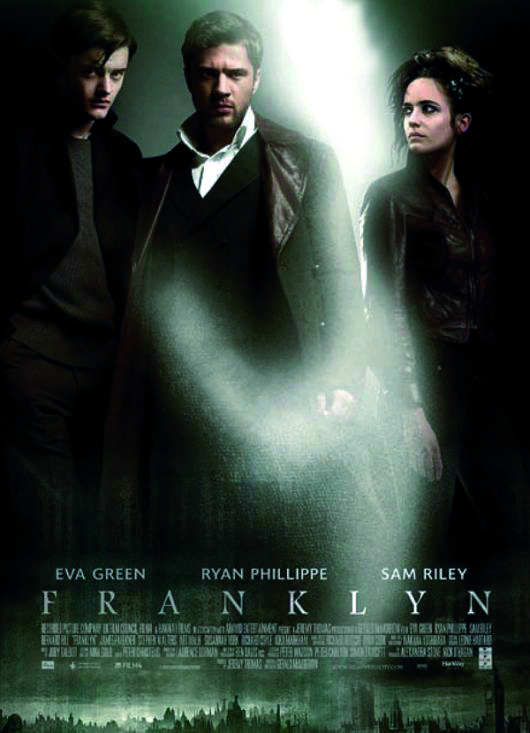 Preest, a mysterious, masked vigilante, is searching for his arch-enemy in the seedy bars and dark, neo-gothic streets of Meanwhile City, a vast and monumental cyber-metropolis and the capital of a religiously obsessed totalitarian state. At the same time, we follow three characters in contemporary London. Esser is looking for his missing son, a damaged veteran of the Iraq war, among the homeless. Milo, an idealistic, young man with a broken heart, runs into his childhood sweetheart, who disappears soon after their meeting. And Emilia, a nihilistic artist, incorporates her failed suicide attempts into her extreme art installations. In some mysterious way, the nightmarish future and the troubled present are linked with one another. Franklyn, the ambitious and audacious long feature debut of young British director Gerald McMorrow, is a remarkable fusion of dystopian fantasy and social problems such as schizophrenia, depression, suicide, post-traumatic stress, homelessness and the desperate longing for love in a cold and heartless society. Meanwhile City is an astounding creation, as if Terry Gilliam would have designed something between Dark City and Blade Runner. The cast is also quite something; led by Ryan Phillippe ( Cruel Intentions, Flags of our Fathers ), Eva Green ( The Golden Compass, Casino Royal ), Sam Riley ( Control, 13 ) and Bernard Hill ( Titanic, Lord of the Rings ).