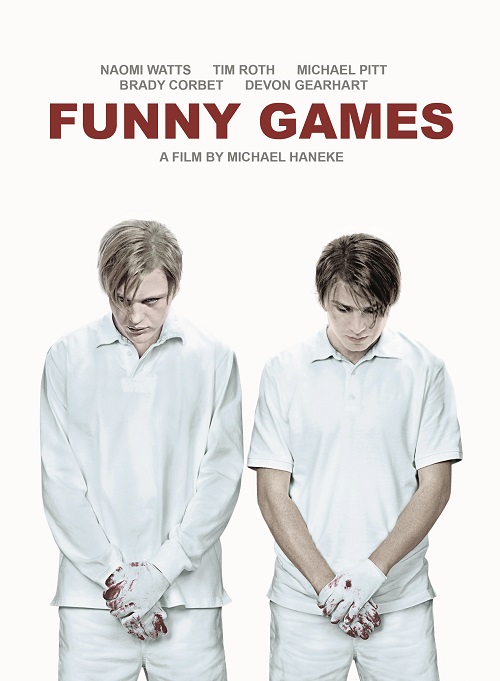 The Farber family, dad George, mom Anna and son Georgie, are on their way to their comfortable summer retreat. Stopping by their nearest neighbours, Fred and Betsy Thompson, in the rich gated community, they notice the couple has two young male guests and seem curiously distant. Fred comes around with one of his guests, Paul, whom he describes as the son of a business associate, to help George launch his refitted boat. Meanwhile, the other guest, Peter, comes to the house to ask Anna if he can borrow some eggs. Even though both youths are extremely polite, they progressively stretch the unwritten rules of social behavior to the limits. When George finally cracks and slaps one of them in the face, the “games” begins in earnest. Michael Haneke’s own remake of his controversial 1997 film, is as provocative and deliberately manipulative as the original. The acclaimed director of The Piano Player, The Time of the Wolf and Hidden has successfully transposed his theme of the relationship between violence and the media from Europe to the U.S. Funny Games is a horrifying and shocking exercise about the desensitizing effects of violence on society. Tim Roth ( Reservoir Dogs, Pulp Fiction, Planet of the Apes ) and a sensational Naomi Watts ( Mulholland Drive, King Kong, The Ring ) play the tortured couple, while Michael Pitt ( Last Days ) and Brady Corbet ( Thunderbirds ) are chillingly convincing as the two young psychopaths.