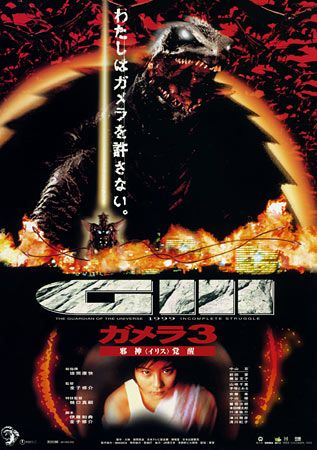 GAMERA III: THE REVENGE OF IRIS

It’s been four years since the battle between Gamera and Gyaos. For young Ayana, memories of that fateful event have turned into bitter hatred towards the supposed “Guardian of the Universe”. Her parents died in the destruction and she now lives with her foster parents in a mountain village. On a dare, Ayana enters a cave where a mythical beast is believed to be sleeping. She discovers an egg-shaped object that spawns a tentacled creature. Recognising its destructive potential, she names the newborn Iris and secretly raises it, hoping to one day take revenge on Gamera. Meanwhile, new Gyaos monsters start to appear. When Gamera battles one of the creatures in Tokyo, the resulting chaos and destruction turns public opinion against Gamera. At the same time, Iris is growing quickly. It is reacting to Ayana’s thoughts, but it needs to join its body with that of a human to reach full strength. Iris begins to fuse with Ayana. As Gamera fights off the wave of Gyaos assaults, a new threat to mankind rips through the tranquil countryside.
Staying true to the “giant monster” spirit, director Shusuke Kaneko, special effect wizard Shinji Higuchi and writer Kazunori Ito, the team behind the first two Gamera’s, create a nightmare vision of street destruction as buildings crash to the ground, streets are ripped by exploding fireballs and citizens run from a torrent of flaming monster flesh. That’s right, monster lovers, Gamera is back. And he’s sharper, leaner, meaner and more frightening than ever.