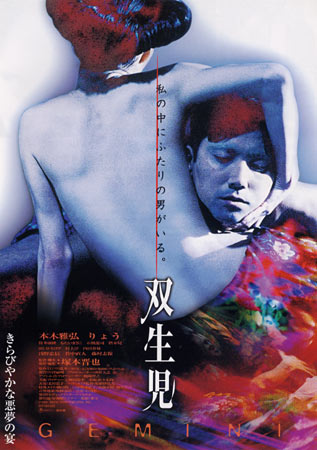 Dr. Yukio Daitokuji is a successful doctor in a good Tokyo neighbourhood. He lives there with his father, mother and Rin, his beautiful new wife. The couple is happy, even if Rin is plagued by amnesia, denying her access to any information about her past. The mystery is compounded by their sense of being watched… by something. Their house is near a slum and a mysterious, rag-wearing man gradually begins killing off the family in increasingly gruesome ways. The terror takes on a new twist when Yukio is attacked and thrown into a well by a man identical in appearance to him. This man then gradually takes over the good doctor’s life while the rightful inhabitant starves at the well’s bottom. A battle for control looms. Gemini, Shinya Tsukamoto’s latest film starts as a costume drama set in the early part of this century, but soon develops into a psychopathic twins horror film. It is difficult to emphasise how aesthetically different this film is from Tsukamoto’s past work. Almost Gothic compositions, a lot of silence and strict attention to classical costume and music give the film an eerily epic flavour. Even the violence is shot in a radically different way than his Tetsuo films. Yet Gemini shares many of Tsukamoto’s recent preoccupations, especially his fascination, so viscerally expressed in Tokyo Fist and Bullet Ballet, with male rage and revenge in its most extreme form. With handsome leading man Masahiro Motoki (Rampo, Shall We Dance, Gonin) as doctor Yukio Daitokuji.