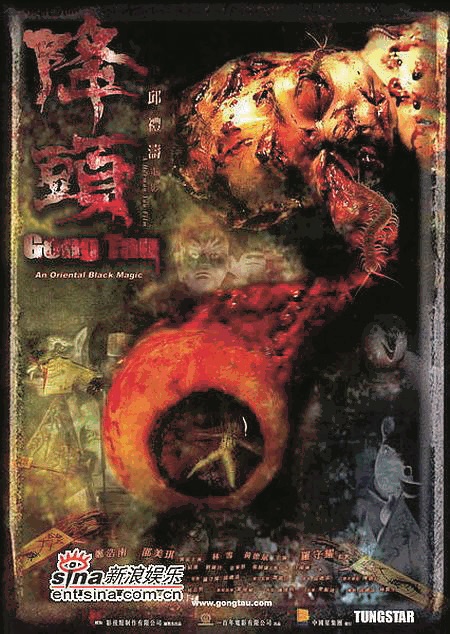 Kar-pi, the wife of hard-boiled cop Cheung, suffers from nightmares and screaming fits. Cheung thinks his wife is exaggerating, but his boss, Sum, suspects Gong Tau, a potent kind of black magic used in cases involving either love or money. The suspected villain is Malaysian criminal Lam Chiu. Twelve years ago, during a chase, Cheung shot Lam in the head. The fiend survived, but lost any sense of pain. When Cheung is persuaded to take Kar-pi to a Gong Tau specialist, she vomits centipedes during the grisly exorcism. But the ordeal isn’t over. Lam resorts to the more powerful Flying Head style of Gong Tau, in which his head detaches itself from his body and becomes a flying vampire. Get ready for a cataclysmic, no-holds-barred confrontation between Cheung and Lam. Writer-director Herman Yau earned his stripes with extreme tales such as The Untold Story and as a cinematographer for Tsui Hark‘s Zu Warriors and Time and Tide. With Gong Tau, a true feast of contemporary voodoo and Buddhist magic, he brings the spirit of Hong Kong 90ties exploitation to the 21st century. There’s plenty of action, blood and even some personal drama amid all the gore. With Mark Cheng ( A Man Called Hero, Election ) as Cheung, Maggie Siu ( P.T.U., Exodus ) as Kar-pi, Lam Suet ( Kung Fu Hustle, Exiled ) as Sum and Kenny Wong ( The Detective ) as Lam.