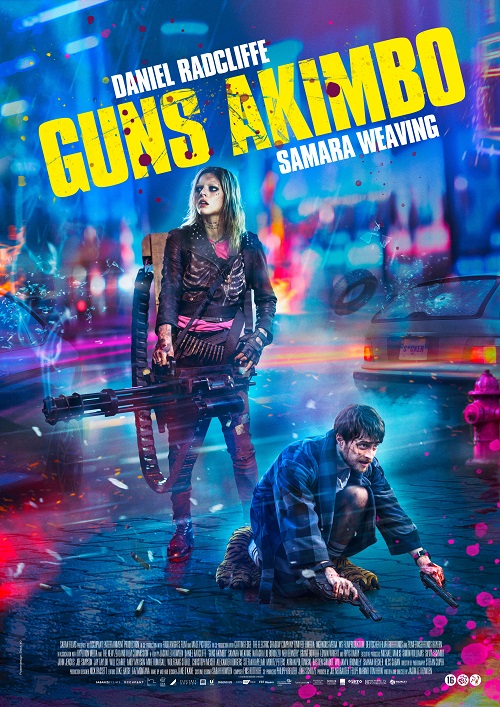 Miles, a millennial slacker in a dead-end job and ditto life, likes passing his free time by trolling internet trolls. However, during a session of sweet trollin’ on Skizm, an illegal website that streams ferocious fights to the death, he pushes the site’s administrators too far. They track down his IP-address, slam down his door and knock him out. The joke’s on him now. He wakes up with a gun bolted to each hand! Not exactly practical in every-day life – it takes showering or taking a dump to a whole new dimension! – but ideal if he is to stay alive in a gruesome game of Skizm… He’s put up against the coked out all-time high score player Nix, who probably already mutilated little kittens when he was a kid and didn’t get any less violent as a grown-up! If you think you’ve had it with all those flashy videogame-style flicks, just give this one a try. It’s a spaced out SCOTT PILGRIM VS THE WORLD with a certain happy Potter, Mr. Daniel Radcliffe, who’s been known for having a knack for picking the weirder roles (SWISS ARMY MAN, JUNGLE, … Huh, both screened at the BIFFF!). Combine him with a no less wacky director, Jason Lei Howden (DEATHGASM… whaddaya know, BIFFF again!) and you get explosive results! Brace yourself for a drug-addled, beer-reeking GTA joy ride of death!