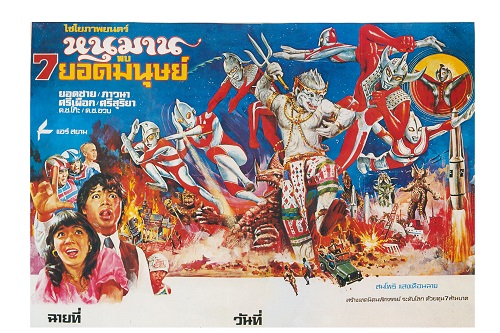 Celebrating the fiftieth anniversary of Ultraman, the Japanese superhero created by the father of Godzilla, Eiji Tsuburaya, Zeno Pictures exhumes a bizarre gem : the trip of the monster slayer to Thailand.
It’s the Thai Ed Wood, Sompote Saengduenchai, former assistant of Tsuburaya who has always claimed to be the creator of the Ultraman-look, who will direct the movie in his wildest psychedelic ( 1974! ) style.
He summons the entire Ultra family, at that time composed of six brothers, and under the guidance of the Ultra-mother, teams them up with a mythological Buddhist character, Hanuman, well loved by the Thais. Hanuman will even get the ability to become a giant ( 40 meters! ), in the same way the Ultra’s do it.
It results in cinematographic madness, a crazy mess of science-fiction, giant monsters, reincarnation, popular beliefs, epic scenes ( Hanuman fighting the sun in his charriot!) taken from Buddist and Hindu myths that will of course culminate in a titanic melee that even the most outrageous of the World Wrestling Entertainment scriptwriters could not imagine, where five giant monsters, six Ultra’s and Hanuman fight it out!