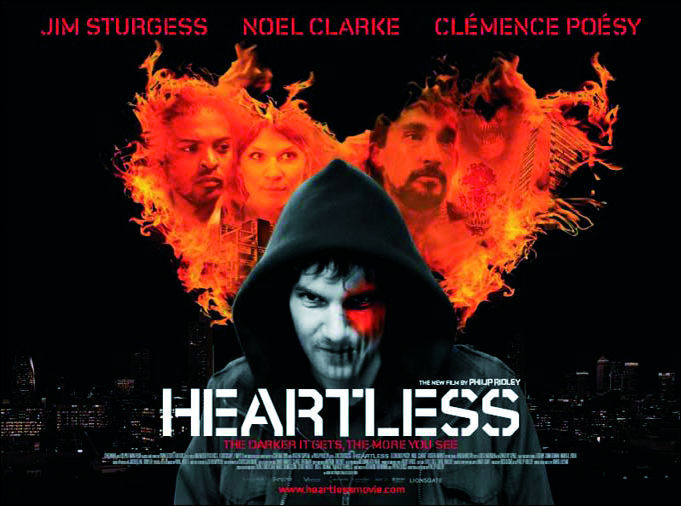 Jamie was born with a heart-shaped birthmark on his face. He lives in a crime infested suburb of London. The introverted young man has little contact with the outside world. His close family is his only universe. The decay, the deterioration and the insecurity that ravage the neighbourhood leave him indifferent. Then, one night, Jamie witnesses how a youth gang is terrorizing the streets. But in stead of youngsters, whose faces are hidden by their hoodies, he sees demons. Jamie becomes convinced that supernatural forces are behind this event. When his mother is murdered by the same gang, he decides to confront the forces of evil on his own. Heartless, the first feature of cult director Philip Ridley ( The Reflecting Skin, The Passion of Darkly Noon ) in 14 years, is a mind blowing study in pain and terror, physical as well as mental, and a violently explicit horror movie. Ridley uses the cliché’s of the genre and the talents of a dedicated cast to present a harrowing vision of a society about to collapse. Like no other, Ridley captures this urban decay in hauntingly beautiful images. Jim Sturges ( Across The Universe ) makes quite an impression as Jamie, but Timothy Spall ( Secrets and Lies, Sweeney Todd ), Clémence Poésy ( In Bruges ) and Noel Clarke ( Doghouse ) also give memorable performances.