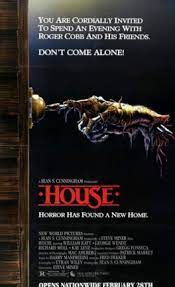 On a holiday in the house of his aunt, Roger Cobb is confronted with the inexplicable disappearance of his son. Did a gruesome psychopath kill the boy or was he simply devoured by the house?
The House isn’t just the next haunted house drama: the original script (despite a regrettable few references to Nightmare on Elm Street and Burnt Offerings), the relativizing humour, the smashing special effects and the magnificent photography are what makes this film -according to some- the outsider of 1986.