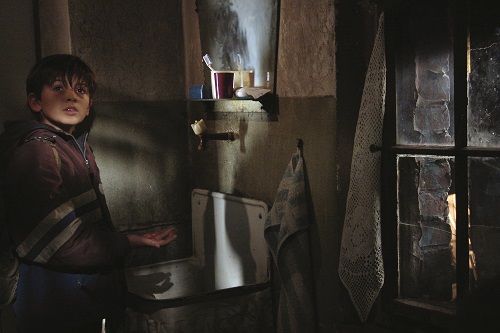 Maly lives in a small township. After a mysterious mining accident that robs him of his father and which creates an emotional gulf between him and his mother, he‘s left to his own devices. To get to the housing complex where he lives, Maly has to cross an area known as Dead Ground, which also houses a burnt-out trailer where once a horrible drama took place. Maly’s fascination with the horror stories he and his friends tell each other on the way to school each day grows as the tales become more lurid, especially when a bloodthirsty hyena escapes from the local zoo and people turn up dead. When wandering of into the Dead Ground, Maly meets a man with terrible burn scars, who presses him into bringing him food. He starts to believe that the man is in fact the notorious hyena, who transforms at night for his murderous forays. Polish director Grzegorz Lewandowski’s Hyena explores the frightful world of the swamps and post-industrial wasteland of Silesia as seen through the eyes of a little boy who finds it hard to distinguish between what is real and what is part off his feverish overactive imagination. Influenced by gothic fairy tales, modern horror like Nightmare on Elm Street and with echoes to Terry Gilliam’s Tideland, Gabriele Salvatores’ I’m Not Scared and Philip Ridley’s The Reflecting Skin, Hyena seduces with its fetid atmosphere and gorgeous imagery.