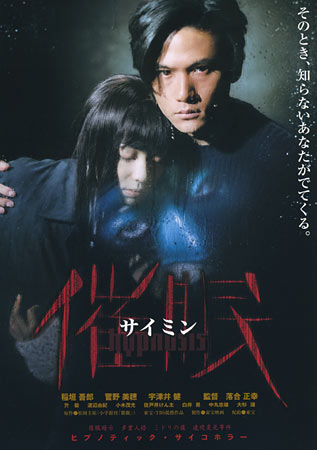 People are dying under mysterious circumstances in Tokyo. The victims appearantly killed themselves. But how do you explain a female athlete that kept running until her legs fractured or a groom who strangled himself at his wedding ? To make it even stranger, their last words were the same : “a green monkey”. Detective Sakurai, a tough cop of the old school can’t explain this mystery. His assistant, young psychoanalyst Saga, suggests that the victims could have been under hypnosis. At first they don’t find any clues to support this hypothesis. But then, by coincidence, they stumble upon a precious witness. On a television show they hear Yuka, a young woman manipulated by the illusionist Jissoji, utter the words “green monkey”. Saga discovers a double personality. Behind the naieve appearance of Yuka hides another creature; a seductress with loose morals. The only solution is psychotherapy. But first she has to undergo a cross-examination by the police. Relentlessly harassed by questions, the creature that lives in her, comes to life. Japanese director Masayuki Ochia (1958°), a graduate from the Nihon University, learned the tricks of his trade by directing numerous hit Tv-dramas such as Knight Head, Yonimo Kimyona Monogatari and Black Out. In 1996, he made his long feature film debut with Parasite Eve. His second movie, Hypnosis, is a disturbing psychological horror film with a gripping finale that will knock your socks off.