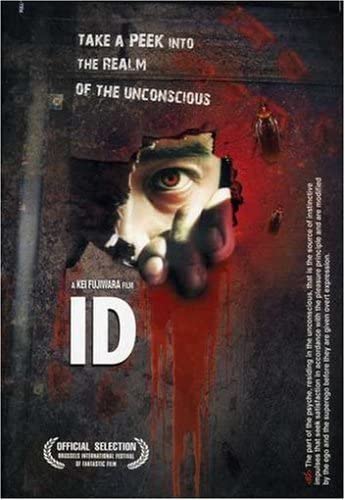 A bloodthirsty killer roams the forest. The sound of water flowing deep beneath the earth, fills his mind. He hears an unknown voice, passing through the depths of his unconscious, his id, emanating from the murmuring of an underground stream. Captivated by this voice, the man descends and is swept away by raging river waters. He’s rescued by the people of a small town steel mill. Soon, terrible incidents begin occurring at the mill. The factory manager is found beaten to death. The perpetrator is a female employee of the mill. It’s her voice that has summoned the killer here. The combined hatred and sorrow of these two brings about the appearance of the foul smelling human-hog monster. At that moment, the detective who has been pursuing the man, arrives at the mill town as if summoned by fate. Kei Fujiwara does not only star in ID, she also serves as screenwriter, production designer, cinematographer and editor. Her second film is even more disturbing than her debut, Organ, from 1996. The instinctive drive and unconscious desire is the basis of what consists our self, our ego, our id. Fujiwara’s cosmic view of these hidden desires, of life and death is sublime to the point of grotesque and is eccentrically and humorously depicted in the film.