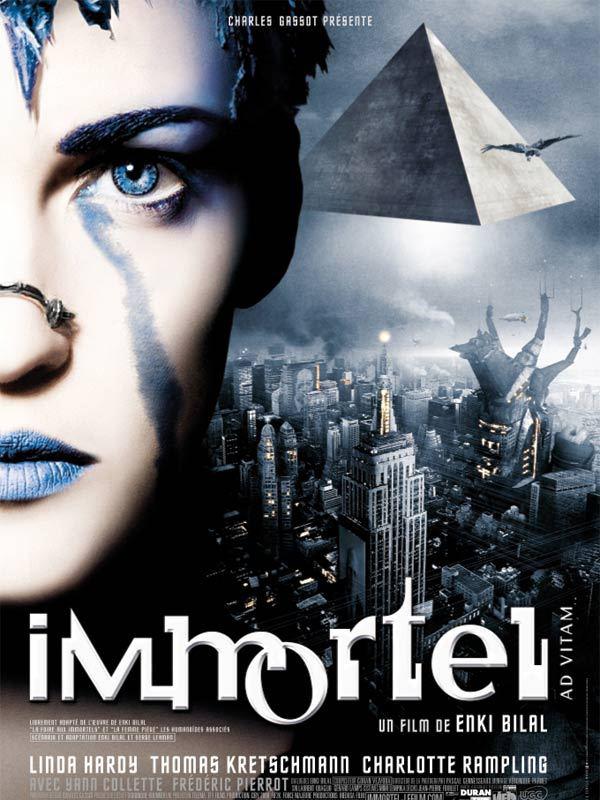 The beginning of the twenty-third century. Somewhere on one of the three levels of New York City, there’s a woman with blue hair crying blue tears. Her name is Jill Bioskop. She doesn’t know it yet, but Horus, the falcon-headed god of ancient Egypt, has cruised half the universe to meet her. Horus has been sentenced to death by his peers. He has just seven days to find Jill in the maze of the city and seduce her. But to do so, he needs to possess a human body, a vehicle of flesh. It will be Alcide Nicopol, a political prisoner who was cryogenised thirty years ago because he knew too much about the New York Apartheid. Meanwhile, the pyramid of the gods flies above Manhattan, aliens make secret plans at the top of skyscrapers and a non-human serial killer walks the streets of Level 1. After Bunker Palace in 1989 and Tykho Moon in 1996, Immortal is the third film in which acclaimed comic-strip author Enki Bilal brings his world of futuristic urban mutilation and dilapidation to the big screen. Linda Hardy (Recto/Verso) and Thomas Kretschmann (Blade II, The Pianist) take up the leads as Jill Bioskop and Alcide Nicopol. In supporting roles, we’ll also see Charlotte Rampling (Under the Sand, Swimming Pool) and Yann Collette (Tykho Moon, Young Indiana Jones).