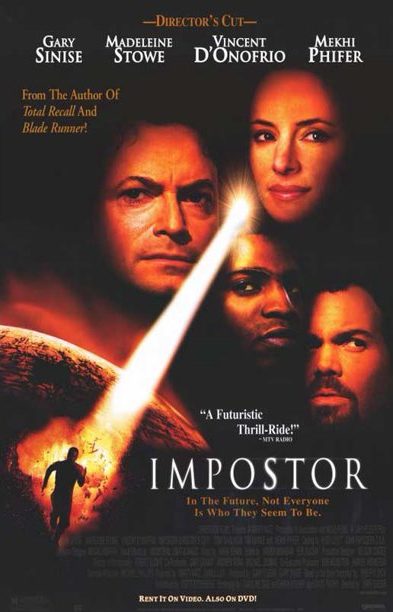 The year is 2079. Earth has been at war with an alien force for over a decade. Spencer Olham is a lauded governmental scientist whose latest invention has the potential to save Earth and its besieged inhabitants. On the way to the ceremony at which he is to unveil his breakthrough, Spencer is intercepted by government agent Hathaway. He accuses him of being an alien spy loaded with sophisticated weaponry that is set to destroy the government. Spencer manages to escape Hathaway’s clutches and becomes the subject of a nation-wide manhunt. He is faced with a two-tiered dilemma. Can he prove his identity to the secret police in time to help mankind and can he ultimately prove his identity to himself ? The science-fiction film Impostor is an adaptation of a short story by the legendary sci-fi author Philip K. Dick, whose works inspired films like Blade Runner and Total recall. Director Gary Fleder (Things to do in Denver when you’re Dead, Kiss the Girls) creates a gloomy, claustrophobic atmosphere and asks poignant questions about the nature of reality and the nature of humanity. Gary Sinise (The Stand, Forrest Gump, Snake Eyes) brings his serious thespian credentials to the role of Spencer Olham. Tall, terrifying Vincent D’Onofrio (Men in Black, The Cell) plays agent Hathaway. With supporting parts by Madeleine Stowe (The Last of the Mohicans, Twelve Monkeys), Lindsay Crouse (The Arrival, Progeny) and Tony Shalhoub (Galaxy Quest, Thir13en Ghosts).