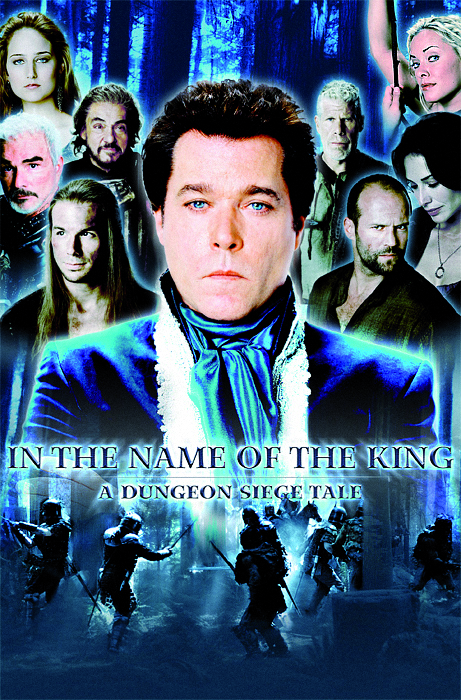 IN THE NAME OF THE KING: A DUNGEON SIEGE TALE

Farmer is a simple family man, just trying to make a living and looking after his loved ones. An unspeakable evil army rampages across what was an idyllic, peaceful world, destroying everything in its path. The want to conquer the mighty Castle Ebb and vanquish the King himself. Amidst this backdrop of war in the Kingdom of Ebb between the evil Gallian and the ruling King Konreid, Farmer sets out to find his kidnapped wife, Solana, and avenge the death of his son, who was killed by animal warriors named Krugs. In The Name Of The King : A Dungeon Siege Tale is a passionate, epic fantasy adventure with non-stop action, vividly drawn characters and a story line, based on the popular video game, that will draw you in with every passing magical minute. It will lift your heart, mind and spirit, make you believe in magic, nobility and the power of love, as Farmer’s devotion to his family knows no boundaries. With a star studded cast headed by Jason Statham ( The Transporter, Revolver ) as Farmer and Ray Liotta ( Goodfellas, Hannibal ), Burt Reynolds ( Deliverance, Boogie Nights ), Claire Forlani ( The Rock, Meet Joe Black ), John Rhys-Davies ( Lord of the Rings, The Ferryman ), Ron Pearlman ( The City of Lost Children, Hellboy ), Kristanna Loken ( Terminator 3, Bloodrayne ), Matthew Lillard ( Scream, Thir13en Ghosts ) and Leelee Sobieski ( Deep Impact, The Wicker Man ).