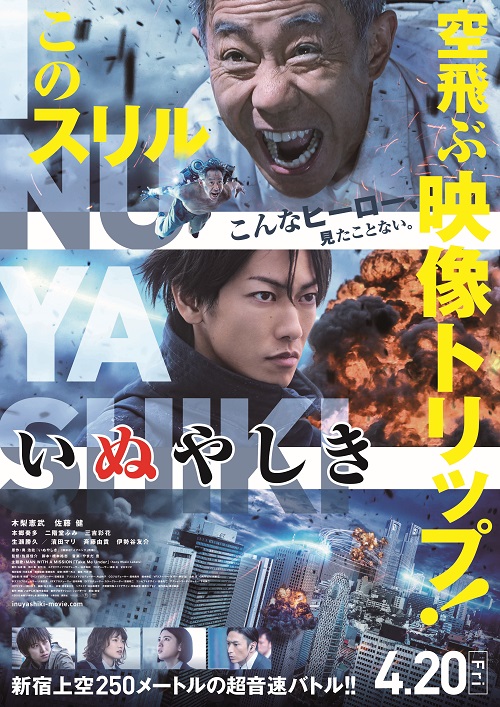 Ichiro Inuyashiki is pushing sixty. With his dull office job and a family that treats him like a leper, you could hardly call his existence on our Blue Planet very exciting. During a medical check-up, he’s told a cancer is eating his insides and he’s got little time left in this world. Completely dejected, he drags himself to a park to cry on a bench. But then suddenly, an alien spaceship stops right above him and Ichiro conks out. When he comes to, it feels like he has concentrated Red Bull molasses running through his veins instead of blood! Without asking his opinion, the extraterrestrials have turned him into a bionic killing machine. Ichiro is over the moon and decides to become the superhero that nobody has ever seen in him. But then someone else who suffered the same fate goes on a crazy killing spree. Inevitably, the two are heading for a showdown… A nincompoop might be forgiven for thinking this is a remake of Kick-Ass for the elderly by the Shinya Tsukamoto of Tetsuo. But that’s overlooking BIFFF-regular Shinsuke Sato. In 2016, the Japanese filmmaker was awarded the Golden Raven for I Am a Hero and the following year, he presented Death Note: Light Up the New World. For this adaptation of Hiroya Oku’s manga, he can count on Noritake Kinashi, world famous at home as one half of a singing comedy duo. His co-star is Takeru Satoh, well-known for the Rurouni Kenshin-films (BIFFF 2013 + 2015), Kiyoshi Kurosawa’s Real (BIFFF 2014), and … Ajin: Demi- Human (BIFFF 2018)!