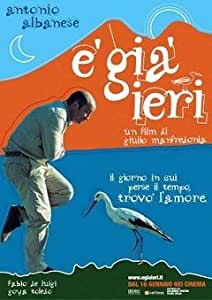 Filippo Fontana hosts a weekly nature show on Italian TV. He’s a difficult, arrogant man who abuses his colleagues and even his bosses. The network, knowing how much he hates warm weather, therefore takes sadistic pleasure in sending Filippo to the Canary Islands in the height of summer to cover the migration of a flock of storks to a local volcano. The beautiful ornithologist Rita carries the burden of showing him around. As always, Filippo immediately gets off on the wrong foot with everybody and starts counting the minutes until he can return to “civilization”. A freak storm prevents him from leaving and forces him to spend another night on the island. But when Filippo wakes up, it is not the next day. It’s the same day as yesterday, with the same people and the same situations and this day repeats itself again and again and again. It doesn’t always have to be Americans remaking successful European films. It’s Already Yesterday, directed by Giulio Manfredonia (If I Were You) is the European version of Harold Ramis’ 1993 Groundhog Day. It’s every bit as charming, funny and bittersweet as the American original with some Italian spices added to the mix and with a good cast headed by Antonio Albanese (La fame e la sete, Holy Tongue) as the arrogant and cynical journalist and Spanish actress Goya Toledo (Amores Perros, Killing Words, Body Confusion) as Rita.