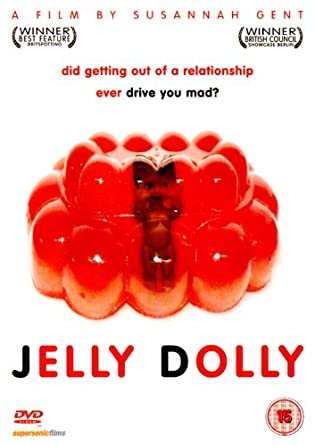 Ever fallen in love with someone ? Ever stayed in a relationship longer than was sensible ? Ever had a ring pull grow where your belly button used to be ? If your name is Audrey, then the answer to all three is yes. Bored, restless and plagued by dark, twisted dreams, she lives with her tepid boyfriend Henry, whose touch she can no longer stand. In contrast, next-door neighbour Alice has a new boyfriend, James, whose energy and confidence draw Audrey to him. Then she discovers that an orange ring pull has grown out of her belly button. This sudden mutation is appalling but magnetic, an itch to be scratched, a scab to pick. As her strange, fevered dreams begin to intrude on reality, she struggles to take control of her life. But what will happen when the cord is finally pulled ? Jelly Dolly is a darkly imagined independent body horror comedy from writerdirector Susannah Gent. It’s a visually and aurally striking surreal long feature debut about the difficulties of modern relationships. Adding enormously to the film’s impact is the impressive sound design. Constant, near subliminal whirring and rumbling accompany the claustrophobic domestic scenes, punctuated by cracks and anonymous thuds. Jelly Dolly presents us with an engaging glimpse of a complex search for happiness.