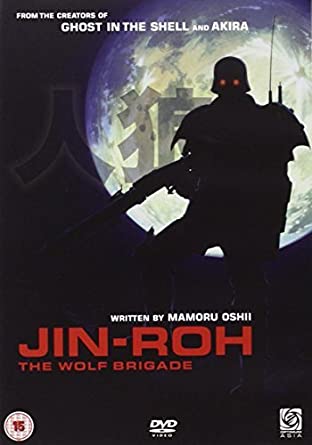 Japan, 10 years after the war. The country is marked by poverty, unemployment and crime. Anti-government movements gain momentum, peaceful demonstrations become full-fledged armed strife. To get in control of the situation, the police corps equips its men with more powerful weapons. Ever escalating violence threatens to plunge the whole country into a state of civil war. In this climate of civil unrest, a young girl kills herself with a suicide bomb in front of crack counter-terrorist Fusé. His corps is caught in a political cross-fire when a rival faction plans to disband his whole division. In the labyrinthine organisation there is talk of a certain mysterious unit called Jin-Roh… But does it exist and what is its purpose?
From the creators of Ghost in the Shell comes a new animated thriller of bloodhounds caught in a political web. Jin –Roh is directed by Hiroyuki Okiura who has worked as an animator on Katsuhiro Otomo’s Akira and Memories and on Mamoru Oshii’s Ghost in the Shell. Oshii conceived the original story and wrote the screenplay.