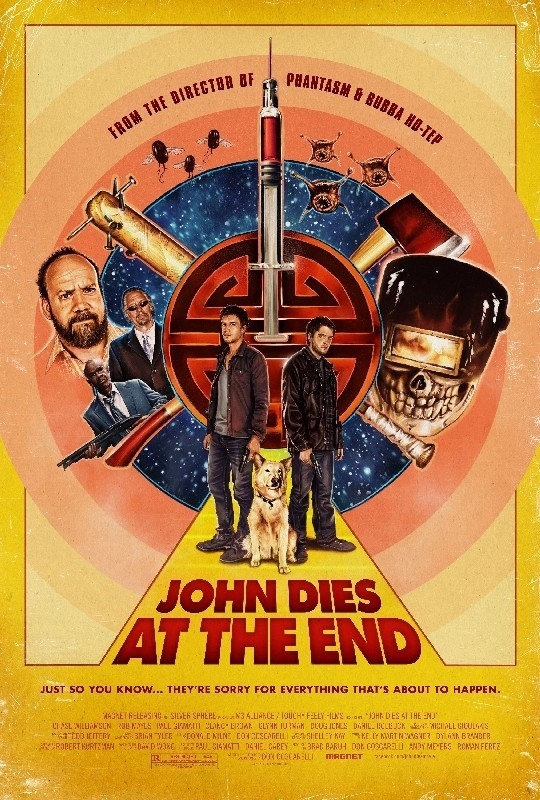 JOHN DIES AT THE END

It’s a drug that promises an out-of-body experience with each hit. On the street they call it Soy Sauce, and users drift across time and dimensions. But some who come back are no longer human. Suddenly a silent otherworldly invasion is underway, and mankind needs a hero. What it gets instead is John and Dave, a pair of college dropouts who can barely hold down jobs. Can these two stop the oncoming horror in time to save humanity? No, they can’t ! Monty Python goes horror in John Dies At The End, the latest film from Don Coscarelli, creator of the Phantasm films and responsible for turning Bruce Campbell into a geriatric mummy busting Elvis Presley ( Bubba Ho-Tep, BIFFF 2003 ). There are some many ways of messing up a movie about how drugs can mess with our perception of time, space and the cosmos, but Coscarelli hits all the right notes in John Dies At The End. He has managed to turn Jason Pargin’s cult novel into a deliriously entertaining and highly original movie. Up and coming actors Chase Williamson and Rob Mayes are perfect as Dave and John. Paul Giametti ( Cold Souls, Sideways ) tries to make sense of their improbable story as journalist Paul Blondstone. With great supporting performances by Clancy Brown ( Hellbenders ), Doug Jones ( Hellboy ) and Angus “Phantasm” Scrimm.