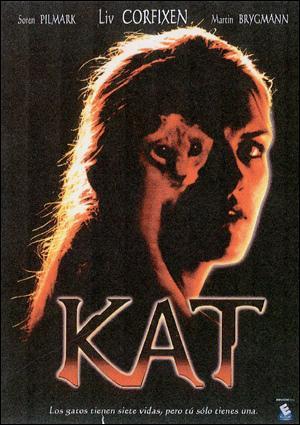 When Maria’s girlfriend tells her that her boyfriend Henrik has been cheating her, she goes into decline. She refuses to look at the evidence presented to her. Instead, Maria becomes absorbed by a series of bestial killings that are always committed close to a place where she has just been. She embarks on her own investigation, which takes her farther and farther away from the real life she cannot relate to, until finally the truth about her boyfriend, her girlfriend and the murders can no longer be repressed. The Danish horror film Kat is director Martin Schmidt third foray in the genre after 1995’s Final Hour (presented at the 16th Festival) and 1996’s Backstabbed. At first you are left in the dark, wondering whether mysterious things are really taking place or whether they’re just in the mind of the protagonist. Then, slowly but surely, Kat evolves into a full blooded monster movie that grabs you by the throat. With Liv Corfixen (Bleeder) as the troubled heroine Maria, Martin Brygman (Italian for beginners) as Henrik and Kingdom I & II actors Soren Pilmark and Holger Perfort.