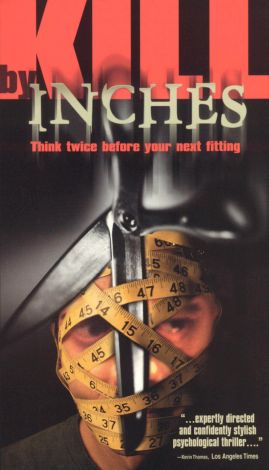 Thomas is a shy and nervous young tailor, dominated by his father, a master of the craft. He is just starting out in his father’s sinister old shop. Thomas is eager to do well with his clients. But his inadequacy in measuring people fosters growing paranoia. Frustrated and paralysed, he awaits the arrival of his twin sister, Vera, for the annual terror of the Tailor’s Ball Competition. Thomas is suddenly challenged to perform his craft under constant and horrifying glares. Terrorised to no end, his fear spiral out of control and leads him to murder. Kill by Inches is a bizarre, almost archaic film set in a former period of the 20th century, where ordinary townsfolk had their clothes custom-tailored and tailoring itself was an honoured craft celebrated at an annual ball. With a tone of restrained urgency and underlying menace, this film charts the most minute traces of psychological and familial disturbance. Somewhat reminiscent of the work of the Brothers Quay, Kill by Inches is set in a world that evokes the dark side of the modern period : the world of Kafka, Beckett, Caligari and Polanski. The co-directors of Kill by Inches come by their cinematic skills through their family heritage as well as film school training, both being graduates from the New York Film School University. Diane Doniol-Valcroze is the daughter of Jacques Doniol-Valcroze, one of the founders of Cahiers du Cinéma. And Arthur Flam’s uncle co-scripted Roman Polanski’s Knife in the Water.