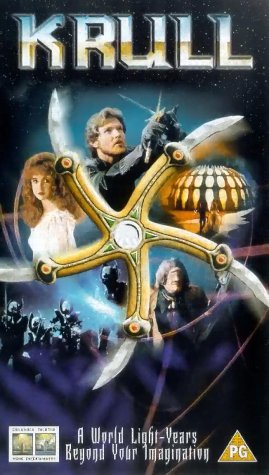 Planet Krull is ruled by a demonic monster, that no one has ever seen and hides in an enormous block of granite, «The black fort».
To end this reign two enemy realms of Krull decide to combine forces, by marrying prince Colwyn to Princess Lyssa.
Unfortunately, the ceremony is brutally disturbed by the «Massacreurs» who first took out the guards. They elope the young bride.
This giant British production brings a surprising cocktail of styles, going from Space-opera like «Star Wars» to the cape and sword films like «Robin Hood».