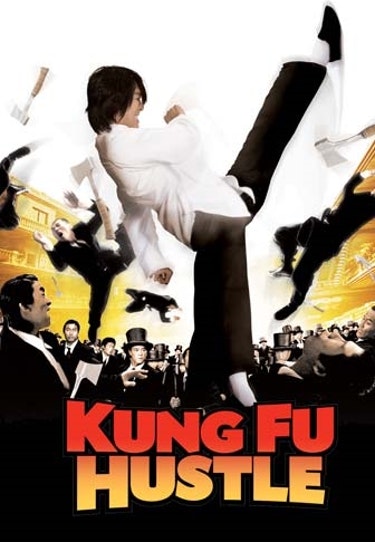 Sing, a hapless wannabe gangster, must overcome his inability to wield a knife and demonstrate his mettle in order to become a member of the notorious Axe Gang. The gang itself wants to reign supreme by occupying Hong Kong’s most coveted territory; Pig’s Sty Alley, a sacred street protected by an unlikely cast of characters, many of whom are kung fu masters disguised as ordinary people. When the locals start to fight back, the gang resorts to hiring more lethal martial arts mercenaries in an escalating battle. Sing must choose between the gang and the locals and overcome his inadequacy in a series of fearsome encounters. With a delirious mix of the sublime and the silly, director-actor Stephen Chow (Shaolin Soccer) has taken the kung fu comedy genre to new hilarious heights. In Kung Fu Hustle, Chow combines Matrix-style effects, Yuen Woping- choreographed fights and his own scatological slapstick for a wild and accomplished piece of entertainment. Not only is Kung Fu Hustle funny, it is action packed, moves like a bullet train and is beautifully shot and edited. There is romance, slapstick, horror, action, a Roadrunner-style chase and countless people getting whacked on the head. Kung Fu Hustle is destined to become a Hong Kong irreverent classic.