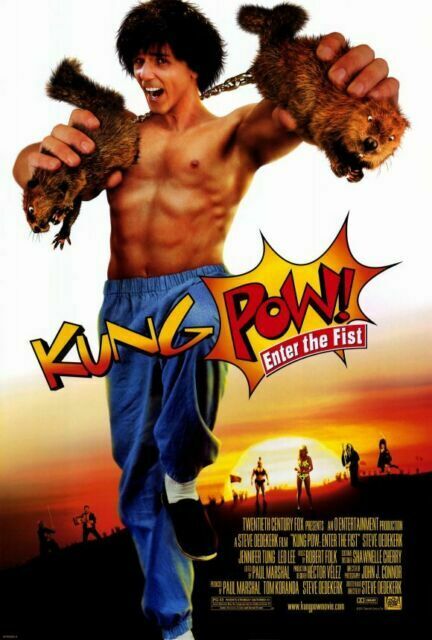 Once every generation, a Chosen One is born to fight evil. While still a foetus, our hero already starts his martial arts education. Skilled surgeons have implanted tiny staffs and nunchakus, in order not to waste nine months of valuable training time. Join him on his journey as he searches for the evil man who destroyed his family, Master Pain a.k.a. Betty. The kindly old master Tang helps him on his quest for justice, as does the beautiful mono-boobed karate queen Whoa. Our hero faces many formidable enemies on his path, including a kung-fu cow whose udder is a lethal lactose weapon, and the evil council, which is made up entirely of French aliens in pyramid-shaped spaceships. But the Chosen One’s journey is also a search for true destiny, which leads to his own self-doubt and eventually makes him cry like a little girl. Like Scary Movie did for the horror film, Kung-Pow does for the martial arts genre. This deranged parody melds borrowed footage from the little known 1976 Hong Kong karate flick, Savage Killers, with a new soundtrack, new voices, new sounds, and actors inserted by green screen. In his previous films, writer-director and main actor of Kung-Pow, Steve Oedekerk, succeeded in highlighting the comic talents of actors like Jim Carrey (Ace Ventura 2 : When Nature Calls), Martin Lawrence (Nothing to Lose) and Eddy Murphy (The Nutty Professor I & II). With Kung- Pow, complete with dubbed voice-overs that never quite match the characters mouth movements,