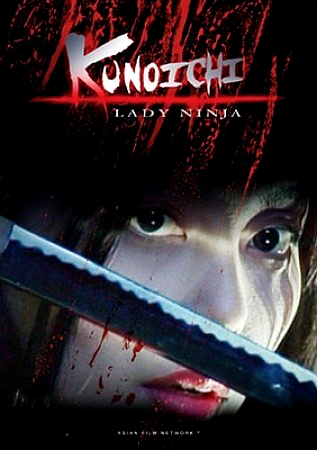 Under Princess Sen, seven ladies of the Hori clan, with assistance from sword master Jyubei Yagyu, are determined to rebel against Akinari Kato, the lord of Aizu. Kato, who is only interested in satisfying his desires, killed their husbands after they dared to critize him. He now sends his elite killer squad, the Seven Spears, to eliminate the women. But they are prepared to risk everything to defeat the cruel Kato.
Kunoichi, the Lady Ninja is a roller coaster non-stop action film. Director Hitoshi Ozawa, who caused quite a stir in Japan with his debut Score, also leads the cast as Jyubei Yagyu. He is assisted by the attractive Yuko Moriyama (Zeiram), internationally known Tomorowo Taguchi (Tetsuo, The Eel), professional wrestler Yoshihiro Takayama and sexy idol Tomomi Kuribayashi.