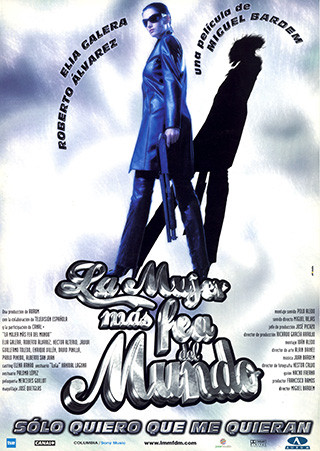 Lola Otero, the ugliest girl in the world, is born in Madrid on January the 1st 1982. Her mother dies immediately of shock and her father follows soon afterwards. Poor Lola, she grows up encountering only revolt and humiliation. Then, as the year 2000 approaches, she meets Doctor Werner, a brilliant scientist, ridiculed by his colleagues for his revolutionary ideas. Lola pours her heart out to the doctor, who subsequently subjects her to a series of experiments. The results are amazing. Lola has now become the most beautiful girl in the world. Eleven years later. The police discover a mutilated corpse of a senior citizen. It’s the latest in a series of murders that always take place at night. And everything points to Lola as the murderer. The Ugliest Girl in the World is the second long feature of Spanish director Miguel Bardem, author of the exciting short La madre (1995) and the long feature Mas que amor frenesi (1996), realised together with Alfonso Albacete and David Menkes. Bardem dips various fantasy myths in a bath of black humour. His movie consists of two parts. The first shows a dark image of late 20th century Spain. In the second we are immersed in a frightening futuristic universe. La Mujer Mas Fea Del Mundo offers science-fiction and comedy, Beauty & the Beast and Jeckyll & Hyde, accompanied by an acidic view on the superficiality of this fin de sciècle. With a superb performance by Elia Galera as beautiful and ugly Lola Otero.