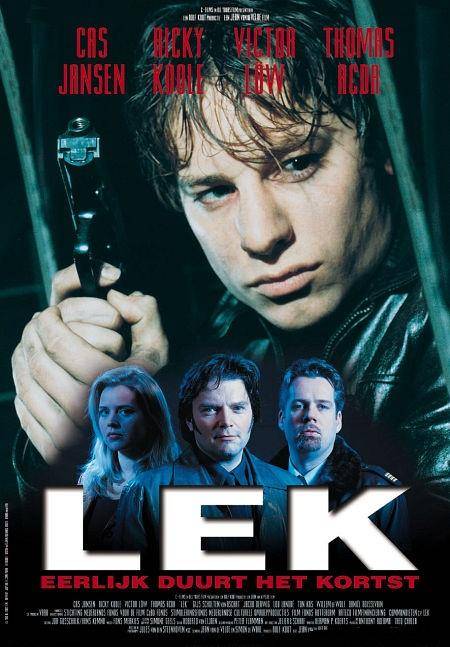 Young cop Eddy is married to Ria. Things are not going well for them, but when the Central Intelligence Department asks Eddy to mediate in a meeting with Jack, his career prospects seem to improve. Jack, an old friend of Eddy’s, wants to become an informer, swapping information on drug baron Haveman for a quiet life. The only condition that Jack sets is that Eddy is his only contact with the police. Under pressure, Eddy accepts the role of “runner”. But when it emerges that operations based on Jack’s information always go wrong because the criminals have got wind of them, it looks like there’s a “leak” in the policeforce. Eventually, Eddy and Jack come face to face. Lek (Leak) by director and screen-writer Jean van de Velde (Little Blond Death, All Stars) is a gripping Dutch thriller about the drugs trade and corruption within the police force. It’s based on the true story Sans Rancune by former policeman Jan van Daalen and it features a number of well-known Dutch actors, such as Victor Löw (Oscar winners Character and Antonia, Domenique Deruddere’s Everybody Famous), Ricky Koole (Alex Van Warmerdam’s The Dress, All Stars), Thomas Acda (Missing Link, All Stars) and Gijs Scholten van Aschat (Evenings, Tv’s Old Money and Plea Bargain).